Chase and Nanaw made sure to brush his teeth in the morning, in preparation for his orthodontist appoint on January 18 -- Martin Luther King Day. Chase is off from school and Mama and Daddy are off from work. Nanaw went to Dobb's at noon for an oil change, and they said she needed $2,000 worth of work on the Escape. So Nanaw is going to talk to Uncle Mike. It was raining when Nanaw picked Chase up from school, so she brought him his own Cardinals umbrella. He told Nanaw he'd gotten his at-home recorder, and on the way home from school, he played the new notes he'd learned. After school, he and Nanaw played MacDonaldsville on Roblox. It was great fun. They also played Chicken Nuggets. Chase played with the Mario guys and some of his other little figures. When they went home, Nanaw realized that Chase's heavy reading book wasn't in his backpack. Nanaw made Chase tell Mama and Daddy about it, and they said he couldn't play his tablet tonight. They want him to learn a sense of responsibility about his homework and remembering to bring home what he should bring home. Nanaw wanted to try to find the story Chase was supposed to read and study online but Mama wouldn't let her. 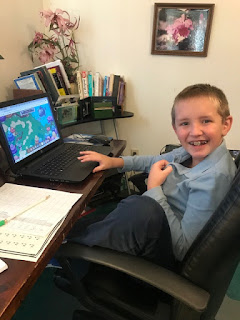 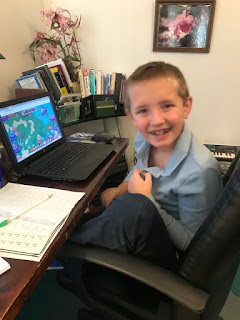 When Mama brought Chase to Nanaw's house on Wednesday morning, he was lying on the sofa with his pillow and blanket. Mama picked up the bag of his guys (stuffed animals) and dumped them all over him. Nana took pictures of Chase buried in stuffed animals -- it was so cute, and he was giggling. Later, when it was time to go to school, Nanaw timed Chase to see how long it took him to put on his coat and mask -- seven minutes, with all his messing around -- very funny. After school, when Chase came running out to Nanaw, he was clutching a drawing that he made of Super Mario Bros. (he told her that was short for brothers) that he made today. He said it wasn't in art or anything; he just felt like drawing it. He wanted to have Mama make a color copy of it so he could give one to Mama and one to Nanaw. He said if that didn’t work, he would draw another one so each of them could have one. Nanaw brought along the tablet because they were going to the cemetery. At Nanaw's house, they went into Chase's room to watch Chase TV. Chase also played on the keyboard and the tablet. He ate a cheese sandwich and chocolate milk. Later he went to play on the computer. He was excited that William was going to play Roblox with him at 5:30 -- hopefully. It didn't work out on Monday or Tuesday. Nanaw can't wait to find out if they played. 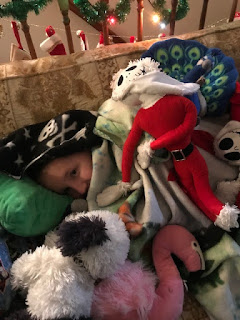 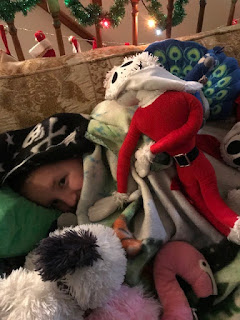 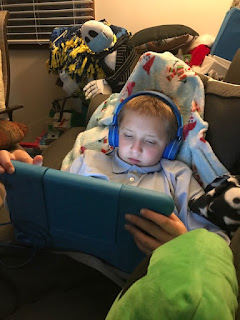 After Mama left on Tuesday morning, Chase put Tee Tee in one of his slippers, saying it was a comfy place for Tee Tee to sleep in. He wanted Tee Tee and Creeper to stay home during the day with Nanaw but said they should come along to pick him up from school. Chase and Nanaw remembered to brush his teeth; the orthodontist isn't too happy with his dental hygiene. When Nanaw picked Chase up from school, he told her he had only a social studies page for homework. He said some of the boys and girls had math and handwriting for homework but he'd finished his in class. Chase and Nanaw went to the cemetery on the way home; Nanaw had brought along her tablet so Chase wouldn't fuss about the detour. He also played with Nanaw's phone; that morning, he'd had her put two new game apps on the phone, and he wanted to play them. When they got home from the cemetery, he played on the tablet, the iPhone and the computer. He had a ham and cheese sandwich but Nanaw didn't want him to have anymore than that because he might be too full for dinner. Nanaw took Chase home early, at five, so he could get his homework done and eat dinner before baseball practice at seven. 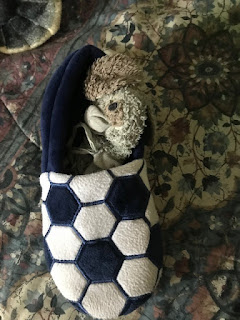 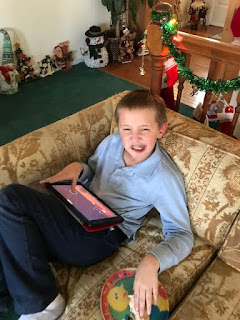 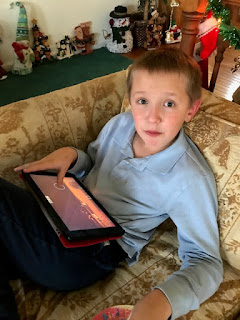 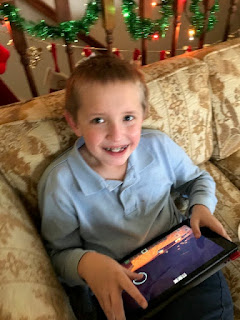 Chase was happy to go back to school, after a week of quarantining and two weeks of Christmas vacation. He was excited that he was going to see his friends, especially William who'd been quarantining all of the school year. When Mama and Chase got there, Nanaw showed them the clear crystal so they could see how much it's growing. Nanaw packed up Chase's box of school books and papers. When they got to school, Nanaw got out of the car to help Chase with the box. He had his backpack with the heavy book in it, and the boy was burdened down. When Nanaw picked Chase up, she forgot to turn into her regular row in the parking lot. So she parked closer to the front in one of parking spots reserved for senior citizens. On the way home, they went to the library. Nanaw had brought along her Fire tablet for Chase to play on. Chase played on the computer when they got home. Nanaw looked in Chase's backpack for the reader's notebook that he said he had to do for homework but she couldn't find it. They decided that Chase had forgotten to bring it home. But in the evening, Mama found it in Chase's binder so everybody was happy. 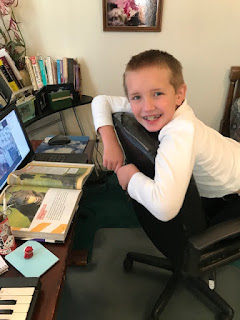 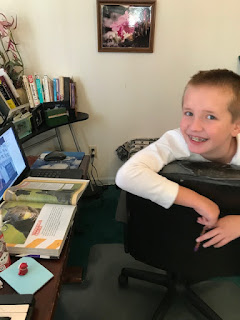 On Sunday afternoon, Nanaw went over to Chase's house. Chase was at baseball practice at Powerhouse with Daddy. Mama and Nanaw went on a reconnaissance adventure to St. Clare Hospital so that Nanaw knew where to go for her appointment on Friday. Mama and Nanaw also drove to the end of highway 141, wanting to know where it stopped. The answer is JeffCo Blvd. On the way home, Nanaw wanted to look at the place they think Aldi will be built, across from Dairy Queen in Columbia. When they were turning from Route 3 onto Main Street, Daddy and Chase were coming from the opposite direction. Mama and Nanaw followed behind and finally Daddy and Chase saw Mama and Nanaw following behind them, and Chase waved. When they were all back home, Mama, Chase and Nanaw sat at the kitchen table and Chase did his spelling words for Mama. Then they all played a Roblox game together on their devices. Then Mama took Sam and Sylvester for their walk. Chase and Nanaw went into Chase's room and played hide and seek with his stuffed animals on his bed. They made quite a mess of his bed so Nanaw fixed it. Nanaw left when Mama got back from the dog walk. They were having salad and French bread for dinner. Daddy and Chase were going to hockey practice at 5:40 p.m. in Affton. 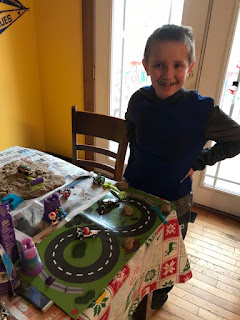 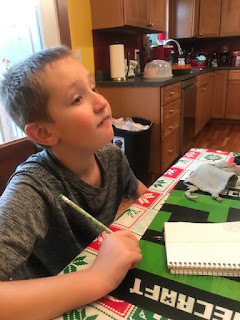 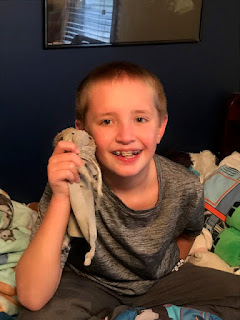 Mama brought Chase over to Nanaw's house on Saturday morning while she went to the grocery store.  She was very excited to get to go to the grocery store. Her grocery delivery experience last week wasn't the greatest. Chase and Nanaw had some adventures. First, they got out the crystal growing kit that Nanaw gave Chase for either his birthday or Christmas. Chase helped stir the crystal containers and was fascinated with the idea that crystals were going to grow. He also like the light-up base that they'll put the finished crystals on. It's going to take a week for the crystals to grow. The other thing they did was for Chase to play in the sink in the water with his Mario guys and Loki and a few of his other figures. After those activities, Chase wanted to put the Robux he got from Nanaw for his birthday into Roblox so they did. Then he wanted to play a Covid Roblox game with Nanaw. Nanaw was a doctor and wore a white outfit and a mask. And, of course, she had her rat on her shoulder. Chase was a patient and was wearing a piece of pizza on his back and his antlers. First Dr. Nanaw did a Covid test on Chase's avatar. Then she gave him a Covid vaccine shot. Very fun and funny. When Mama got there, she told Chase he was going to have Mozzarella sticks and little smokies for lunch. I think Mama's plan was to have Top Shooters wings for dinner -- now that the quarantine was over, Daddy could go pick them up. Nanaw forgot to take pictures today so she's going to use a Facebook memory picture from four years ago that Mama sent to her today. It was from the time Daddy, Mama, Chase and Nanaw went to the movie theater to see Finding Dory. Chase posed in a special area they had set up for photos. Happy Birthday to Mama!!! Mama had the day off for her birthday but she brought Chase over at the regular time. She was going to take down the Christmas tree in the living room, Chase's Christmas tree in his room and the Christmas decorations. Friday was Chase's last day doing Zoom classes at Nanaw's house. It was pajama day if you made a donation. Chase wore his Black Watch tartan plaid little old man jammies. Chase did really well on his last day. He was very self-sufficient in finding the Zoom links and the books and papers he needed for class. Amelie was the only other student doing Zoom with Chase. One of the best parts of the day was a Zoom session with a police dog and his policeman. Ms. Kennedy arranged for a policeman in Kentucky to do a Zoom presentation for the class. The dog is ten years old, is named Fox and is a Belgian Malinois (he looks like a German Shepherd). Chase loved watching the dog and is excited that next week, a Columbia policeman is bringing his police dog to Chase's class in person. Chase said he's looking forward to going back to school and to seeing his friend William, who's been doing Zoom for the whole school year but who is now back at class. Nanaw baked Mama's birthday cake and wrapped her presents (mostly Jack Skellington presents). After school, Nanaw and Chase tried again to make Mama's birthday game work but they couldn't. They'll keep trying because Mama really wants the game. At five o'clock, Chase and Nanaw went to Chase's house, with the birthday cake and Mama's presents. For dinner, they had Arby's. Daddy went to Waterloo to get their order. Nanaw had delicious chicken tenders. After dinner, they had super fun playing The Game of Life. Daddy was the banker and he won the game. At first, Nanaw went bankrupt and had all kinds of promissory notes. Then things turned around for her, and she ended up coming in second in the game. After the game, Mama opened her presents from Nanaw. After presents, everybody had cherry chip cake and dark cherry with chocolate pieces ice cream that was delicious. 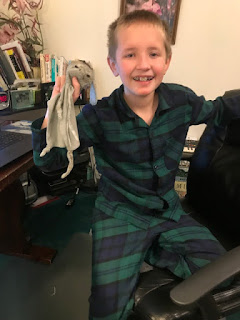 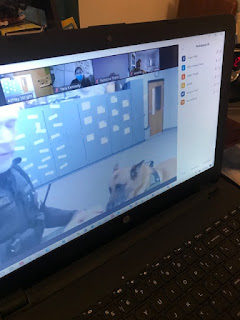 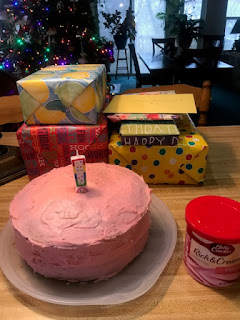 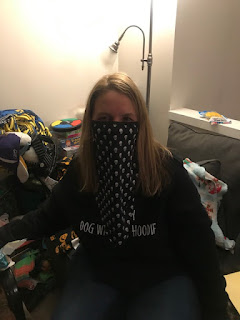 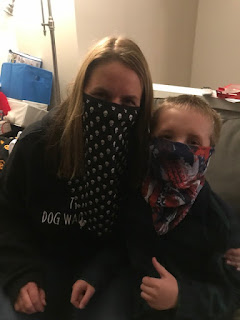