Chase had cross-country practice after school on Tuesday so Nanaw didn't pick him up until 4:45. He told Nanaw he had homework -- Holes questions and math homework. As he was working on the Holes questions, he said they were going to watch a movie about Holes at school. Nanaw said she would check to see if the library had Holes. They did so Nanaw put it on request. Chase showed Nanaw his books from the book order -- he got some really interesting-looking books and games. When he finished his homework, he played Roblox on the computer in the dining room. At home, Mama told Chase that the cross-country coach said Chase is a really good runner and could be one of the best in his class. Chase is not sure he wants to do cross-country next year but Mama is hoping he will. Chase says he might be interested in track. Everybody is hoping that the Cardinals win tonight's game with the Brewers because if they do, they'll clinch their division. 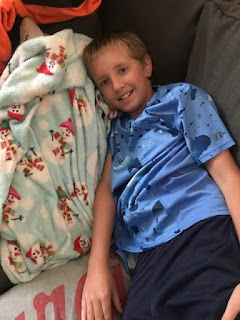 This will be an easier week than usual for Chase. They're doing the Iowa Standardized test this week so they won't have their usual class work and homework. When Nanaw picked Chase up from school, he told her the Iowa test was okay, and he thinks he did well on it. Later when she asked what kinds of questions were on the test, he said there were questions on English, numbers, and shapes. Tomorrow, the teacher says he needs his calculator. Mama had Nanaw ask Chase if he has his calculator, and he said it's at school in his locker. Chase reported two problems to Nanaw. The first one was about his AR reading book. He said he didn't have it because his teacher had it on her desk. He doesn't know how or why it got there. Mama and Nanaw told Chase that he has to ask her about it first thing in the morning and then get it back so he can do his AR reading. The second problem had to do with his glasses. He couldn't find his glasses in his backpack, and he said he didn't have them at school today. Chase and Nanaw looked everywhere but couldn't find them. They couldn't remember if Chase wore them home on Friday. It was very troubling. Then Mama called to tell them that she found them in the dark eyeglasses case at home so all is well with the world.

Daddy and Chase went to church on Sunday morning, and Chase saw a few of his friends. Chase had a 5:30 hockey game at the Affton rink. Nanaw rode to the rink with Mama. They took heavy coats and blankets because it’s cold on the ice rink. Chase and his team played really well but unfortunately, they lost 5-0. Nanaw ride back with Nanaw, and Daddy and Chase got home a little while after Mama and Nanaw. Mama had fixed delicious chili and wonderful cornbread for dinner. Chase removed the beans and then ate the chili. After dinner, Chase presented his saint slideshow to Mama — his assignment from school. He did his project on St. Roch, the patron saint of dogs. The slideshow was awesome. He did animation on the slides and special markings. Mama and Nanaw loved the presentation and were very impressed. Mama especially liked the dog bringing bread to St. Roch. He used an arrow to show where in France St. Roch was born. He circled dates on the calendar to show when St. Roch’s feast days were. After the presentation, Chase and Nanaw went into his room and studied for his sentence quiz Monday on The Jeopardy game on his Chromebook. When they were done studying, they played ball with the guys on Chase’s bed. 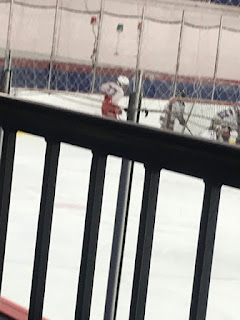 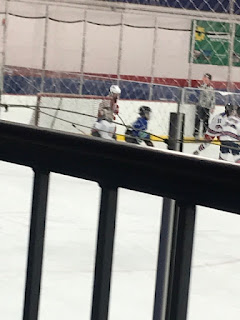 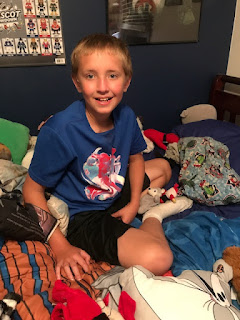 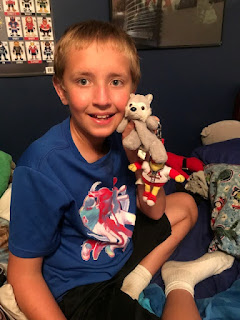 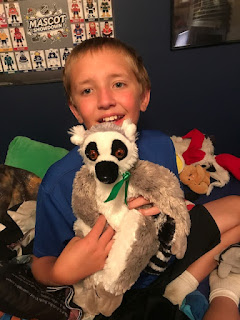 Mama brought Chase over to Nanaw's house on Saturday morning while she went to the grocery store. Nanaw told Mama and Chase that from reading Mrs. Cornish's weekly email, Chase has an English quiz on Monday on sentences. Chase said he forgot to bring his English binder or anything else home to study for the quiz. Mama was not happy. After she left, Chase had Nanaw search for the Jeopardy game that reviews the sentence things they learned and that would be on the quiz. Chase and Nanaw spent the next hour studying sentences. Nanaw said they would study them again tomorrow on the tablet when she's visiting Chase. After today's studying, they played in Chase's room with his hockey locker room. When they left Nanaw's house, Chase and Mama went to Red Roof to get reimbursed for a $20 scratcher. Chase had forgotten his Fitbit at Nanaw's so she dropped it off at Chase's house. Chase had a hockey game in the afternoon, and his team won the game 1-0. So exciting! After the game, Chase, Mama and Daddy stopped by Emma's birthday party at the rollercade so they could give her a birthday present. After the party, they went to Buffalo Wild Wings by Dick's at the mall. Chase had cheese curds, which he loves. 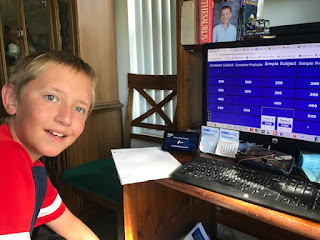 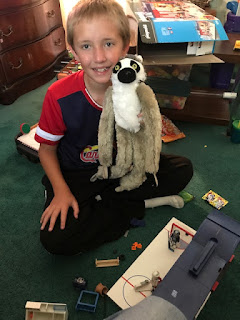 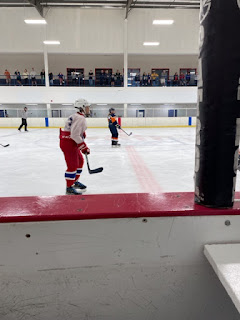 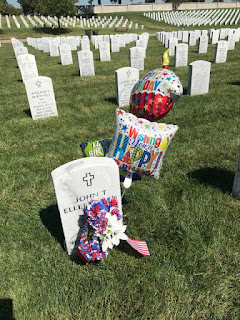 Mama had the day off to spend with Aunt Becca on her birthday, so Mama took Chase to school. When Nanaw picked Chase up, his friend Will was with him. Nanaw asked if they wanted to go to the big park, and they agreed enthusiastically. First, they went to the swings, and so did Nanaw. They all had fun swinging. Then the boys played on the merry-go-round, then went exploring to the creek. Next, they went to the baseball field to play Wiffle ball. Nanaw pitched to them, and they got a fair amount of hits, despite Nanaw's pitching being really bad today. After Wiffle ball, they played soccer in the batting cage. That was really smart because the netting surrounding the batting cage kept the soccer ball from getting away from them. It started to rain a little, so Nanaw went to sit in the car. Then it rained harder so the boys came to the car. Nanaw had brought drinks and treats for them so they had sort of a picnic in the car. After the picnic, they went back to Nanaw's house. For a little while, Chase and Will played in Chase's room, then they went outside to play soccer for a few minutes before Nanaw drove Will home. Back at Nanaw's house, Chase did 20 minutes of AR reading, then played on the computer. Nanaw took Chase home at six; Mama was going to take him to soccer practice. Things Nanaw learned: Reagan's grandpa developed the subdivision where Will lives; there's an entrance path to the Sportsmen's Club across the street from where Will lives that Will uses to go fishing in the Sportsmen's Club lake; Will says the teacher said they could wear jackets without hoods next week if they're cold -- that's a ban on hoodies. Today would have been Pawpaw's 83rd birthday. Nanaw had dinner with him at the cemetery. 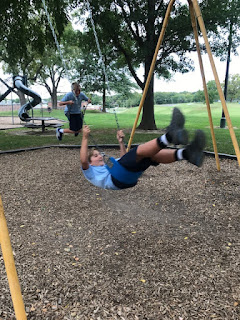 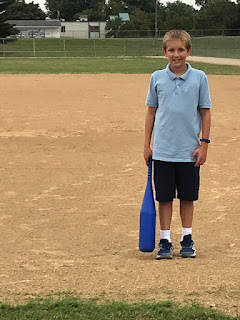 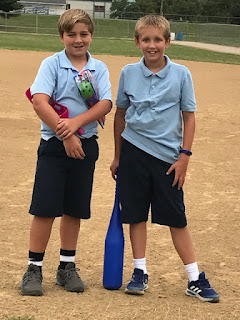 Chase declared today and tomorrow as National Lemur Day. He brought all of his lemurs with him, and Nanaw made a sign for them. Chase had cross-country practice after school, and Nanaw went to pick him up at 4:45. Uncle Mike came as she was leaving. He was there to pick up the mums he bought for Chase’s fundraiser. Chase did his math and religion homework, and he has a science quiz tomorrow but he didn’t have anything to study. He said he didn’t get his paper back. He wasn’t happy with Nanaw because she wasn’t happy with him not being able to study. When Nanaw took Chase home, Daddy asked him if he brought his science book home. Chase said no but didn't explain why. The grumpy picture below is because Chase didn’t want Nanaw to take his picture. 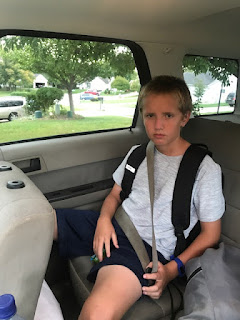 Here's what Nanaw posted on Facebook: "Today was Grandparents' Day at Chase's school. Grandparents could meet their grandchildren's teachers and explore their classrooms. The green notebook in the picture of Chase is his journal. He says they write in their journals every day. The principal took one of the pictures of Chase and Nanaw and sent it to Mama. It's nice to be on good terms with the principal!" Nanaw went to Mass with Chase, and they sat behind Brady's grandparents. Nanaw was very excited to see Chase's classroom. He sits at a table with three other students. They stack their books and notebooks on the floor next to their chairs. They have a reading area with a little sofa and two chairs. Chase showed Nanaw his locker; it's small and will be crowded when he has to put his winter coat in there. 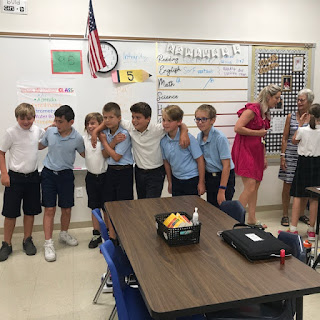 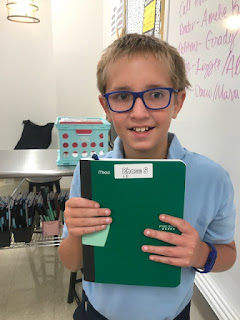 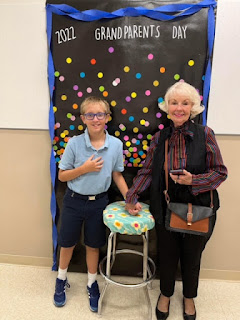 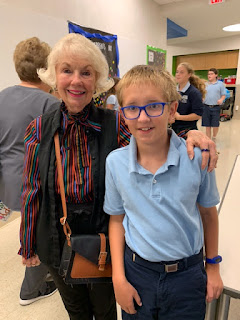 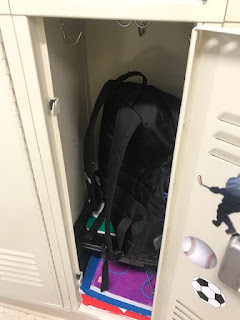 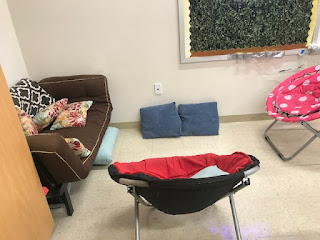 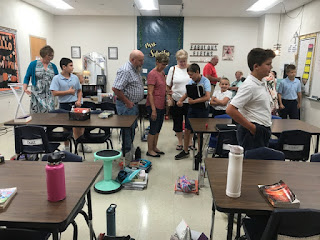